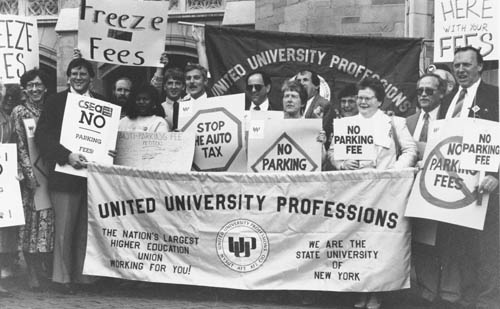 Photo from the UUP archive.

Determined to Have a Voice

United University Professions (UUP) was founded in 1973 by university professionals determined to have a voice on things like workplace safety, policies, wages and benefits. They knew their greatest strength was in their numbers, and banded together with an initial membership of 3,500.

In the more than four decades since, United University Professions has grown exponentially, becoming America’s largest higher education union. More than 35,000 members strong, UUP is a powerful ally for university professionals, demanding respect and fair treatment with the voice of thousands.

UUP is a unified voice, protecting members rights at the bargaining table and on the job. The union also speaks on behalf of public higher education statewide, nationally and internationally. UUP is the voice of SUNY’s academics and professional employees to the SUNY Board of Trustees, SUNY System Administration, the state’s elected officials and the public. UUP is also affiliated with New York State United Teachers and the American Federation of Teachers, the National Education Association and the AFL-CIO.

Learn more about the history of UUP.