What does UUP do?

The union negotiates our Contract 2011 to 2016, which determines minimum salary rates, health benefits, a grievance procedure, and many of the rights that we now have, including free parking, tuition-free courses (on space-available terms), and Individual Development Awards.

The union also negotiates agreements with the State regarding evaluation and promotion procedures, including the Memorandum of Understanding between the University and UUP relating to a system of Evaluation and Promotion for Professional Employees.

The union administers some of the health benefits; at present, this includes dental insurance and vision care.

The union studies many aspects of our working life and recommends improvements, attempts to correct problems, address injustices, and assure that all members receive due process rights.
The union lobbies State legislators and other elected representatives on behalf of SUNY and all public education.

What does the Buffalo Center Chapter do?

The UUP Chapter holds regular Membership meetings, at least once a semester, and special meetings when needed. For example, before negotiations for each contract begin, there is a special meeting on the contract.

The UUP Chapter has a listserve, where union members can learn quickly about union news and concerns – UBUUP-NOTIFICATION-LIST

The Chapter has a department representative system, which facilitates communication between members and officers, and organizes members throughout the campus. To find out who your department rep is, or to volunteer, please contact the Chapter Administrative Assistant, Kristen Rinker.

The Chapter has a number of standing and ad hoc committees to deal with issues on campus. For more information and contacts, check out our Statewide Committees.

The Chapter is looking for more activists, people who are interested in improving the climate on campus for our members, people who want to see a more democratic and just workplace, and people who want to help in labor’s struggle for a fairer world.  If political action is an area that might interest you, please contact Tim Tryjankowski. 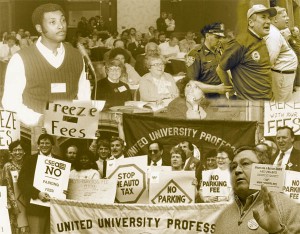 From its infancy in 1973 when the union represented 3,500 members, United University Professions has been in the fore of higher education unionism. It has grown not only in numbers, but also in influence, and proudly represents more than 35,000 members on 29 state-operated SUNY campuses and System Administration. Throughout its history, UUP has acted in the best interests of its members, and those efforts have benefited thousands of UUPers, the SUNY community and the entire state of New York.

UUP would not be what it is today without the commitment and enthusiasm of its leaders and members who spur the union toward greater achievements.